The account installing node.js will need to be able to sudo to root.   In my example below, my Linux account is going to be called “nodejs”.

1. Create the directory that will store the node.js files.  Then change into that directory.

2. To install the node.js, a compiler will be needed.  Installing the compiler will twice prompt for input.  Answer yes for both, otherwise the “make install” process will fail with errors.  Depending on the internet connection speed, this process may take five minutes to complete.

Below is the first prompt for a response, type y and enter to continue.

This is the second prompt, again type y and enter to continue.

3. Download the compressed install file from nodejs.org.  At this writing, the most current version of node.js is v0.10.25.  There may be a new version, adjust the link to down load that version.

4. Un-compress the down loaded file.  Again adjust the file name if working with a more current version.

5. Change to the just uncompressed directory. 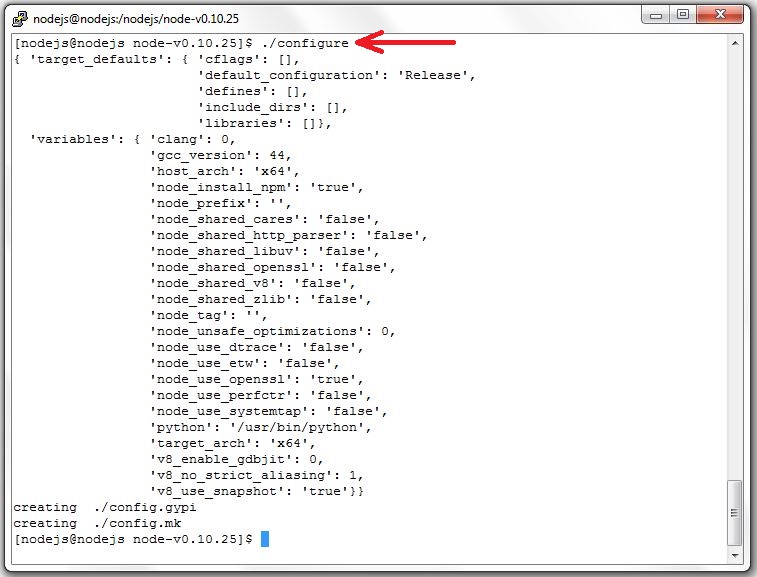 7. Run the “make install” command.  This process will take about five minutes to run.

7. Check to see if node.js was installed successful.  Run the node command to see the current version.  If the version is returned, then the server is ready to run node.js.

Now you should be able to use node to run your java scripts.

This blog is a compilation of many message-boards and a lot of trial & error.  Many of the methods I attempted did not work on Oracle Linux Server.  If there is a better or fast method available, please let me know in the comments below.  I will either update this blog, or remove this writing & link to the better writing.